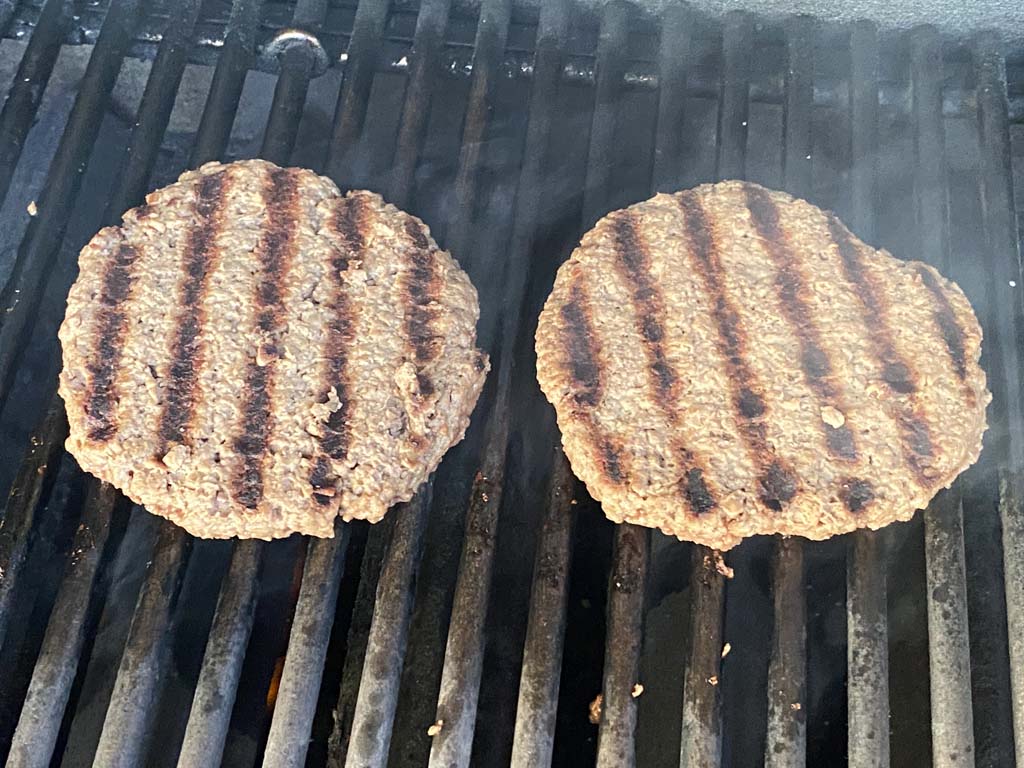 In July 2019, I post a video review of the Impossible Burger at Burger King. The flavor was OK. The problem was the degree to which it was cooked. Two of the three burgers I tried were extremely dark on the outside, almost to the point of being burned, and they were not moist and juicy.

At the time of that video, raw Impossible Burger was not widely available in supermarkets. In the video, I commented that someday I’d like to get my hands on some and try cooking it on my Weber gas grill.

I was doing my weekly grocery shopping at Safeway and noticed a display of raw Impossible Burger in the meat department, a 12-ounce package selling for $14.99! (At the time of writing this, just one month later, this same package sells for $9.99 at Safeway and $7.94 at Walmart.) I gulped hard, added a package to my cart, and headed to the checkout stand.

This video discusses some of the highlights of this article. In the video, you can see and hear how Impossible Burger flares up and sizzles on the hot grill like a real beef burger.

Here are some photos of the Impossible Burger packaging. 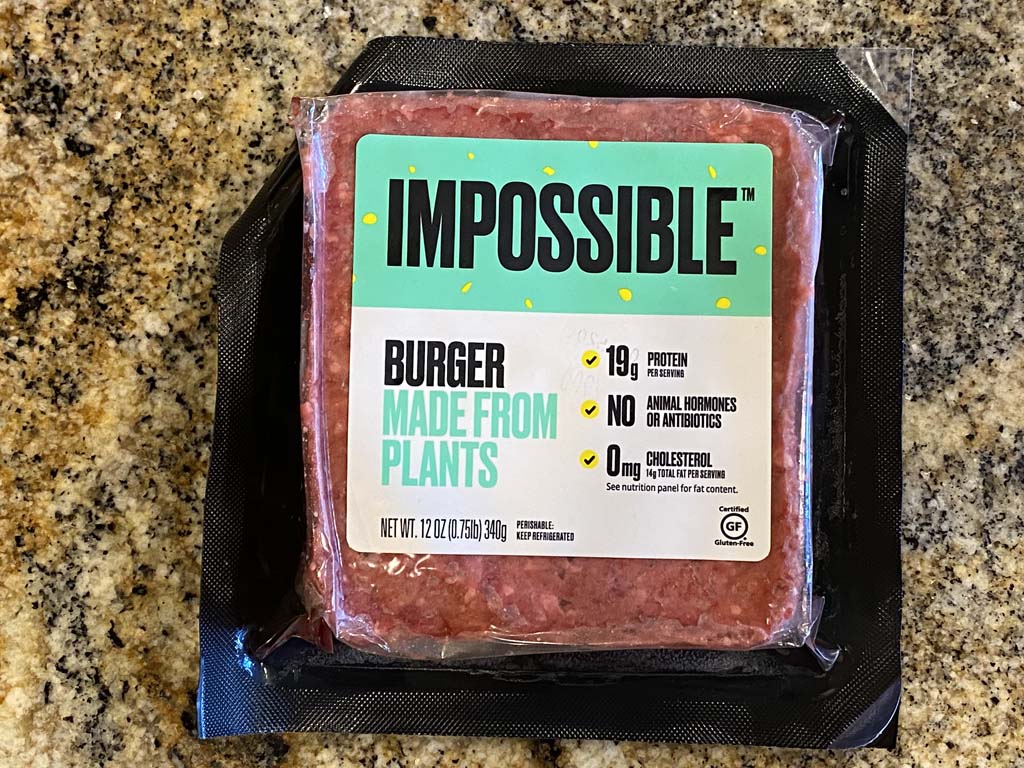 The front label states 19g of protein per serving, no animal hormones or antibiotics, 0mg of cholesterol, and 14g total fat per serving. Impossible Burger is certified gluten free and must be kept refrigerated. 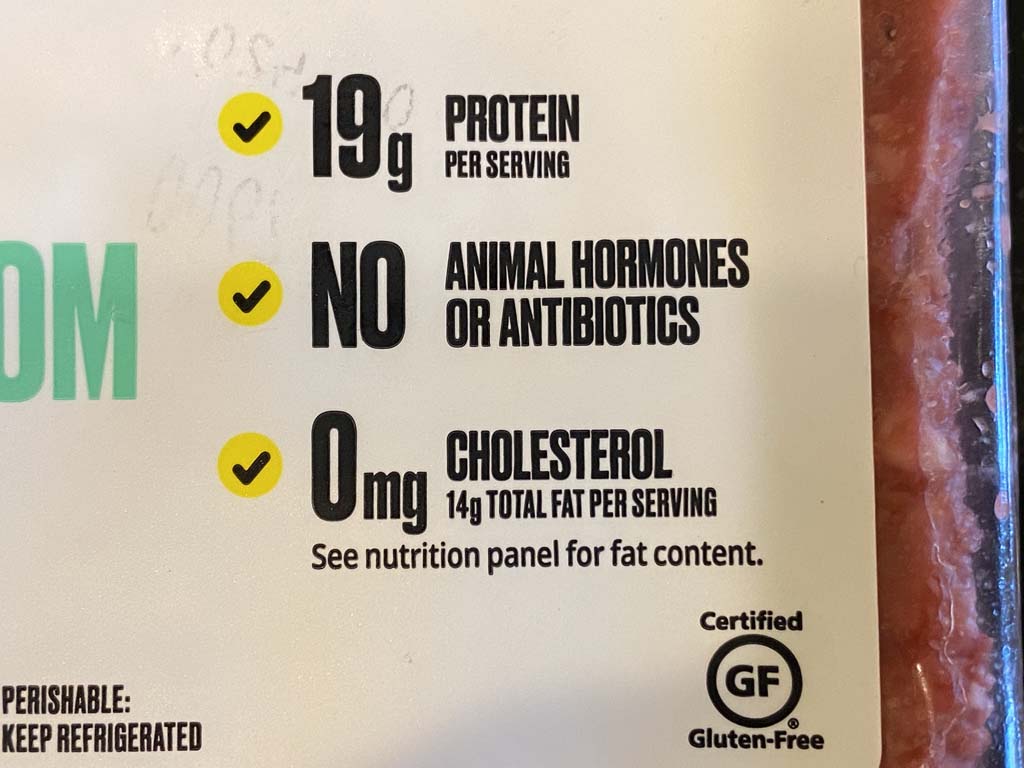 The back label describes suggested uses for Impossible Burger and includes a link to recipes, cooking instructions, nutritional information, and an ingredients list.

Here’s how Impossible Burger looks coming out of the package. It has the same fine texture and iron/blood aroma of packaged ground beef. The aroma comes from soy legume hemoglobin, a substance derived from soy plants that mimics the distinctive aroma and flavor of heme that occurs naturally in beef. 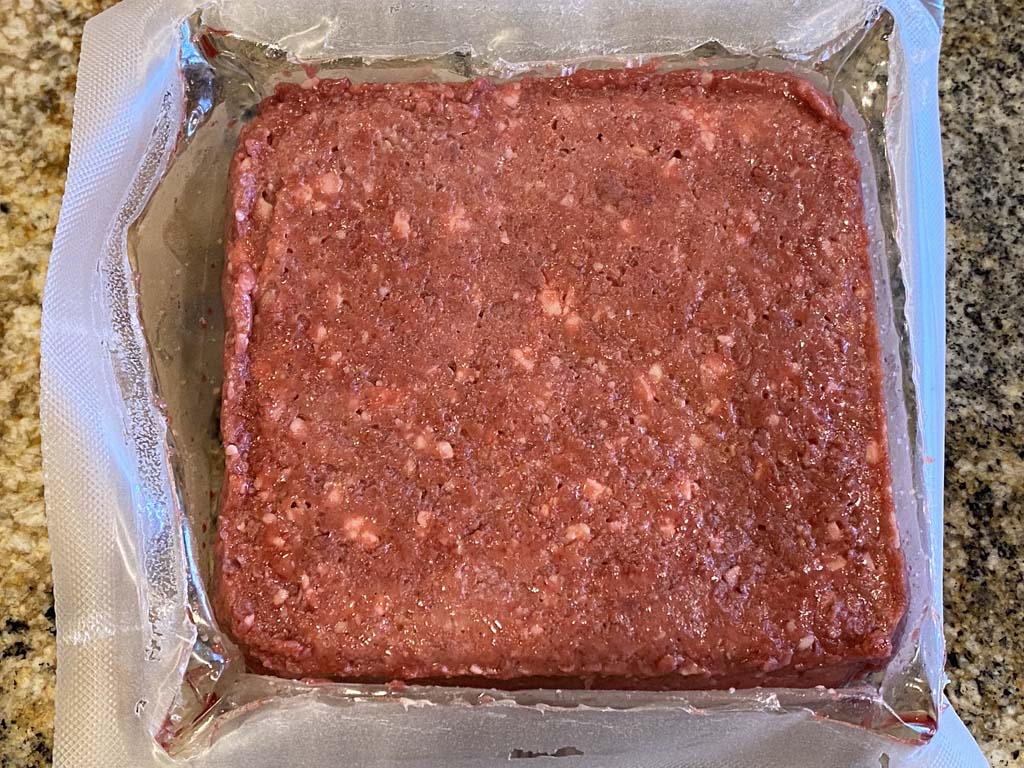 The interior of Impossible Burger looks very much like regular ground beef, with flecks of solid fat made from coconut oil and sunflower oil that mimic bits of beef fat. 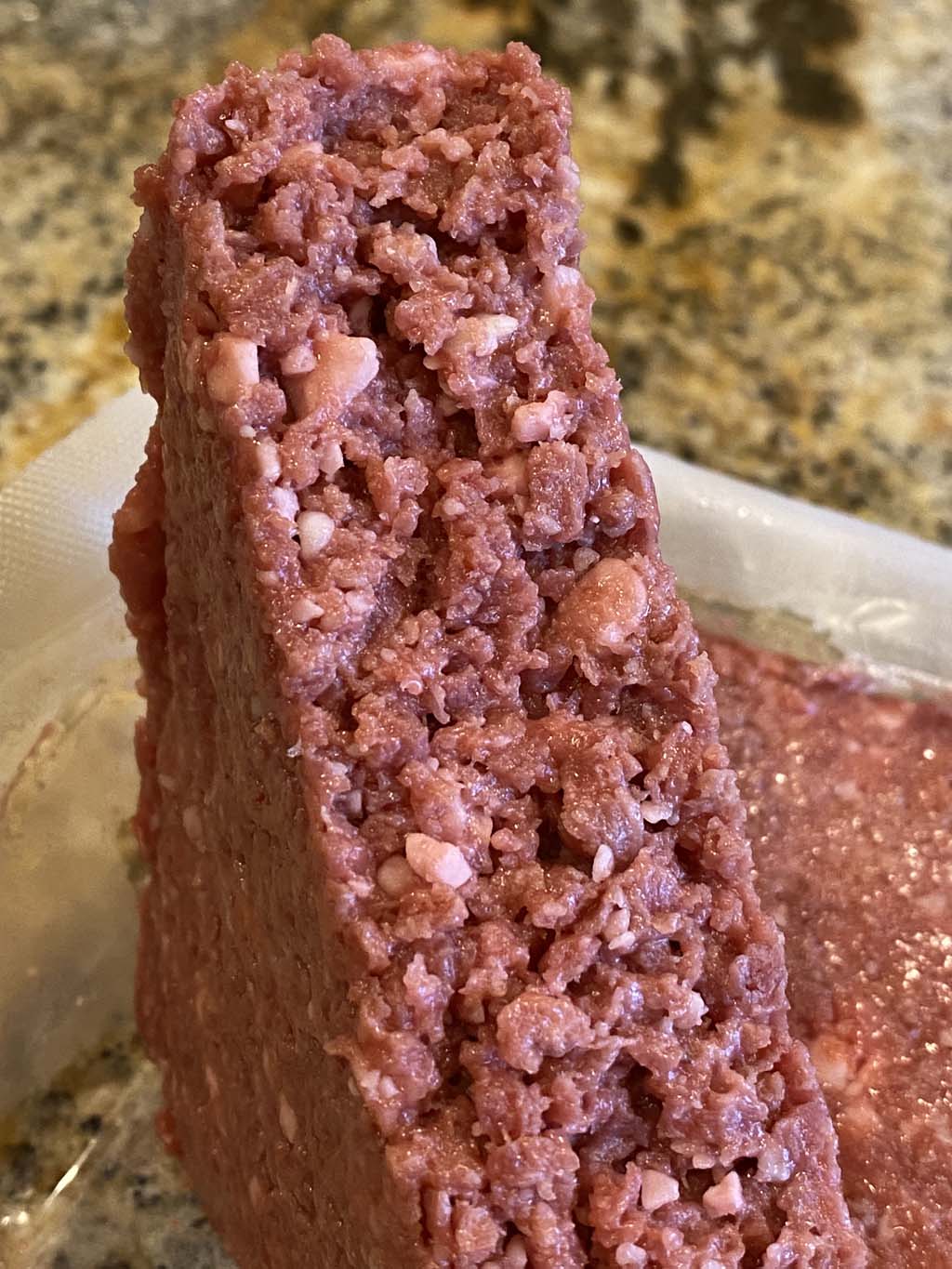 I made two generous 6-ounce Impossible Burger patties from this 12-ounce package. I figured a larger burger would allow me to get a good sear on the outside while offering me a chance at some pinkness on the inside, like a regular beef burger. 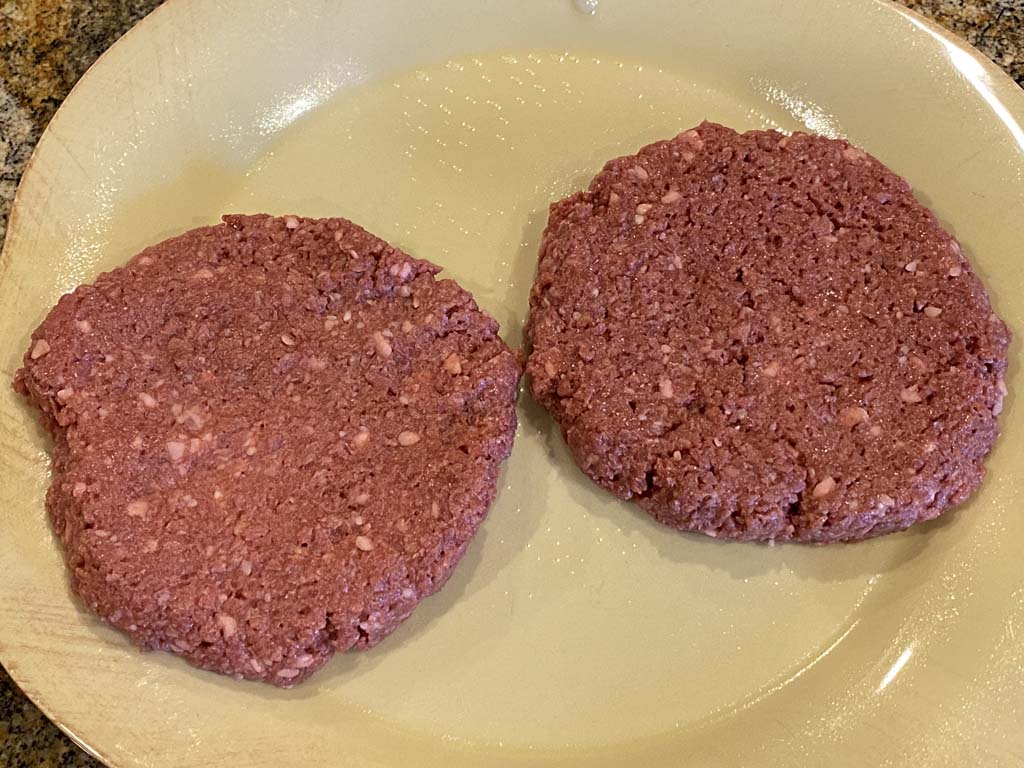 When forming the patties by hand, I noticed that the consistency was very similar to real ground beef, except that those fatty bits of coconut oil and sunflower oil were harder and felt much more pronounced than do the bits of beef fat in a normal burger.

With the patties formed, I popped them back into the refrigerator while I prepared the grill. 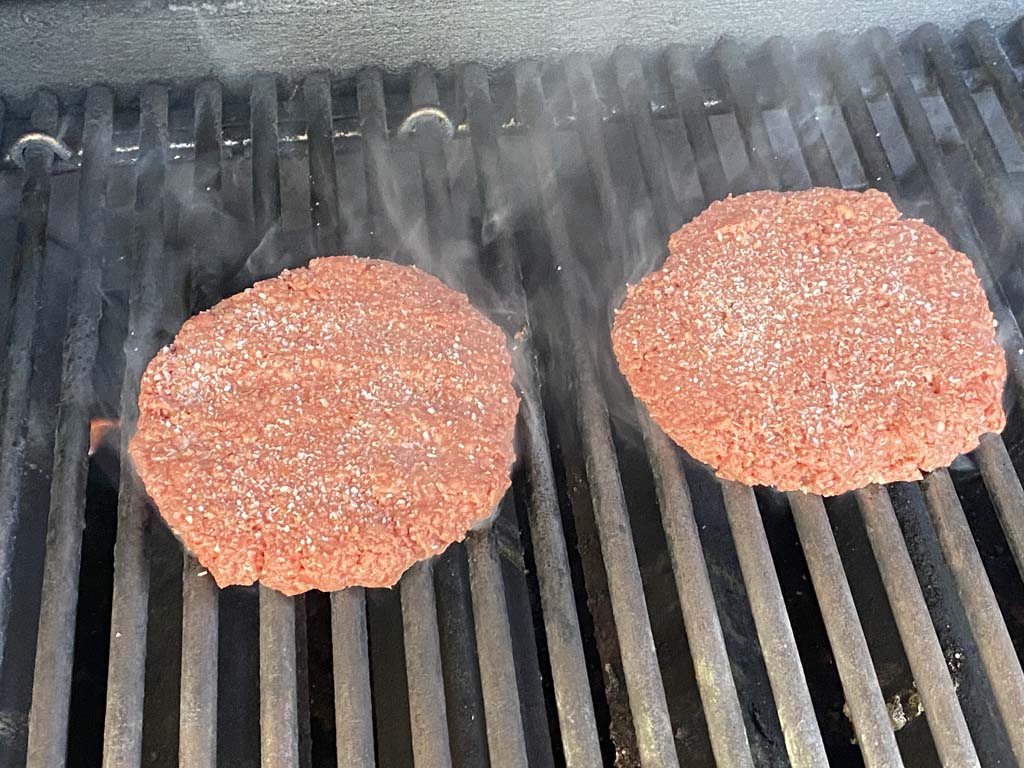 I preheated my Weber Summit 450 gas grill with all burners on HIGH for 10 minutes, then cleaned the grates with a grill brush and turned all burners down to MEDIUM.

I retrieved the patties from the fridge, gave the top surface a light spray of non-stick cooking spray, and put the sprayed side down on the grate. A quick sprinkle of kosher salt and these Impossible Burgers were under way!

Here’s how one of the patties looked after 2 minutes on the grill, with the distinctive brown/gray color of cooked meat and red juices exuding from the edge of the patty.

At the 3 minute park, I sprayed the top side of each patty with non-stick cooking spray, flipped them over, and grilled them for another 3 minutes.

At the end of 6 minutes total cooking time, I checked the internal temperature with a Thermapen Mk4 instant-read thermometer. It registered 144°F, below the recommended temp of 160°F, but low enough that I thought I still had a chance at some inside pinkness.

I let these Impossible Burgers rest just long enough to get them on a bun, apply the condiments, and sit down at the table to eat. 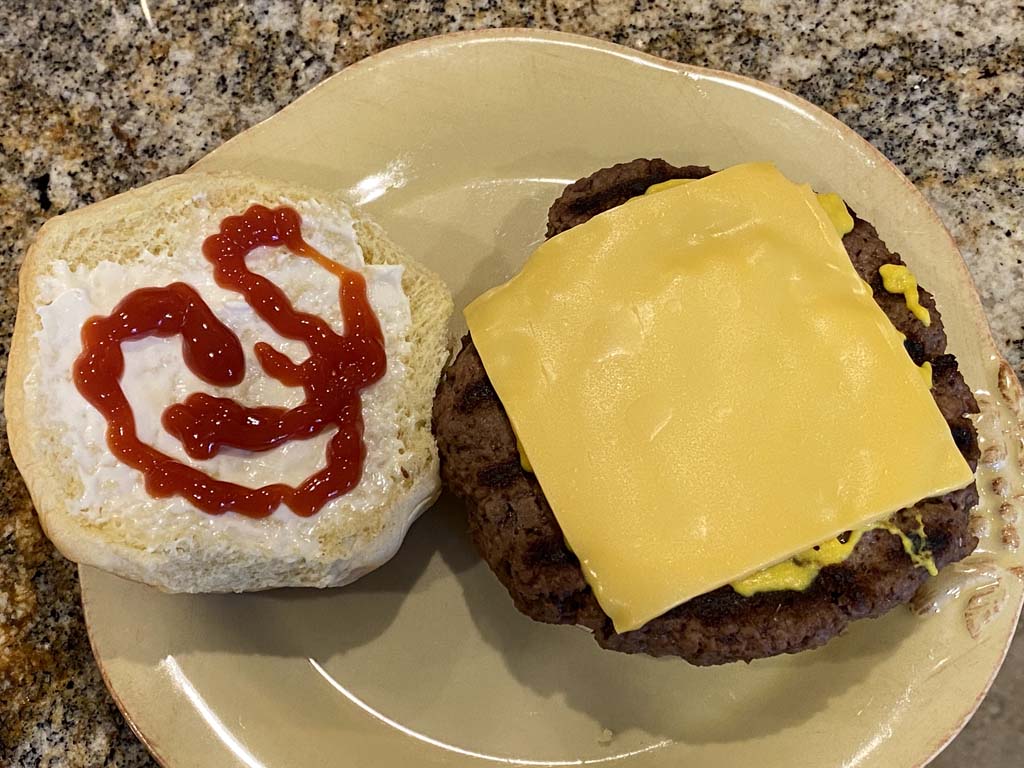 Here’s my evaluation of these grilled-at-home Impossible Burgers for appearance, texture/juiciness, and taste, using the A to F grading system.

Here’s the finished Impossible Burger as it came off the Weber gas grill. 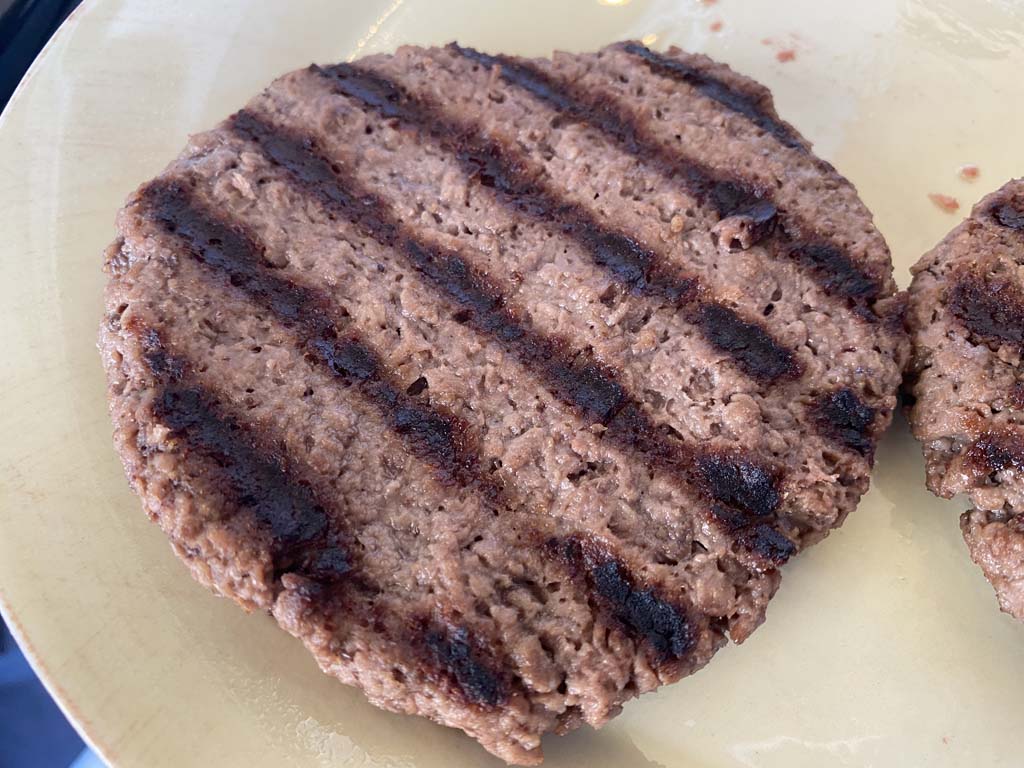 Nice grill marks, but a bit dry looking despite being cooked to only 140°F. These patties didn’t have the sheen of a perfectly grilled 80/20 beef patty. Sort of an average looking backyard burger that was a little overcooked.

One thing I can say with absolute certainty is that my homemade Impossible Burgers were far superior to all three of the samples I tried at Burger King, one of which is shown here. Yuck! 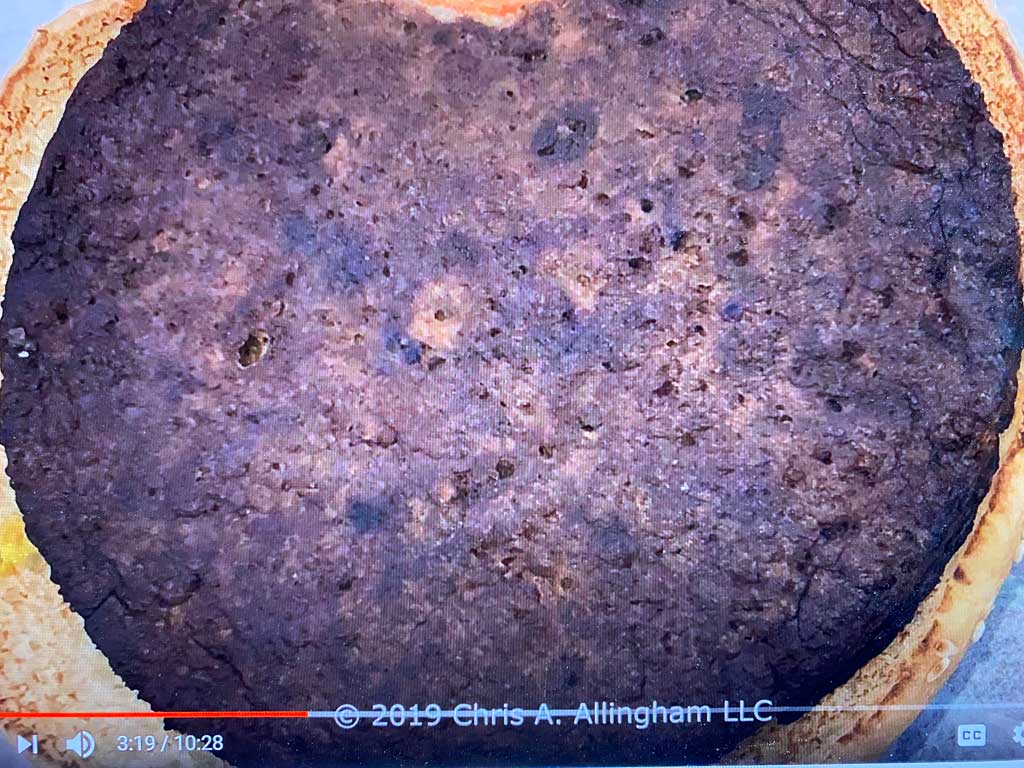 Here’s the interior view of my Impossible Burger. Visually, the grind of the “meat” and the pink color is very close to real ground beef. This is where Impossible Burger really shines. Someone could be forgiven for looking at this photo and thinking it was a beef burger.

When eaten, the texture feels a lot like real ground beef, but it’s lacking in juiciness even when grilled to just 140°F. It is moist inside, but you won’t have any juices running down your chin. This lack of juiciness also affected the exterior appearance of the patties, as noted above.

These Impossible Burgers ate like a slightly overcooked burger. A grade of B for texture, C- for juiciness, but giving more weight to the juiciness score results in a grade of C overall in this category

Nobody’s going to confuse the taste of a plain Impossible Burger with that of a real beef burger in a blind taste test. Put Impossible Burger on a bun and pile-on the condiments and the question of taste becomes fuzzy. It tastes meaty, it tastes different, sort of like beef base or beef gravy, but it doesn’t taste bad. In fact, if you were served an Impossible Burger at a backyard barbecue with all the fixins and the host told you it was his “special seasoned burger recipe”, you might just down it, enjoy it, and not give it a second thought.

So while it doesn’t exactly match the taste of real ground beef, it’s beef-like and not objectionable. There’s room for improvement, I’m giving it a grade of C+ for taste.

Impossible Burger won’t be knocking real ground beef out of my grilling rotation anytime soon. It doesn’t measure up exactly to real ground beef in terms of appearance, texture/juiciness, or taste, and it can be expensive, to boot. However, it seems like a reasonable substitute for those not wanting to eat real meat. It’s easy to form into patties and cook on the grill, and now having some experience with it, I would not hesitate to serve it to a vegetarian or vegan guest at a future backyard grilling party.

Of course, there’s much more to the topic of plant-based meat as a substitute for real meat. There are considerations in terms of human health, the environment, sustainability, feeding a growing world population that craves more and more meat, and whether cultured, lab-grown muscle meat will overtake plant-based meats in the future.

It will be interesting to see what the future holds. In the meantime, I’m going to fire-up the grill, make some 80/20 ground beef burgers, and enjoy the real deal.