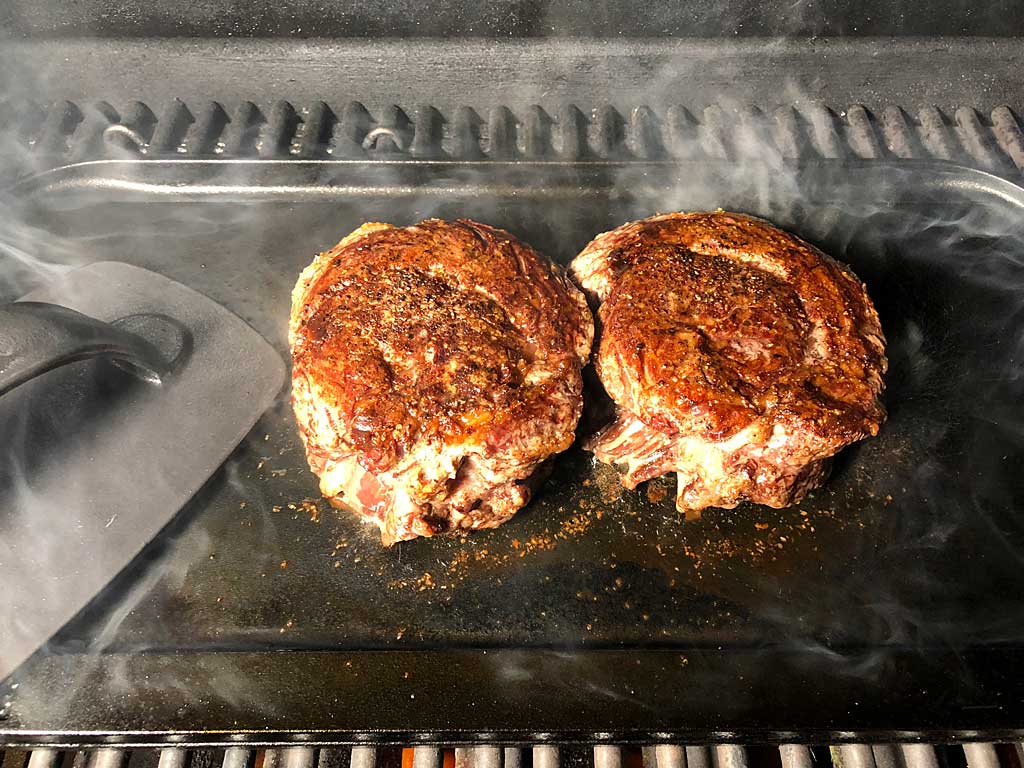 In a post last week, I encouraged you to try grilling a USDA Prime tri-tip roast. As long as I’m on a Prime meat kick, I’d like to suggest that you try the harder to find but oh so delicious USDA Prime ribeye cap steak, also available from time to time and in limited quantities at Costco.

I last grilled ribeye cap steaks in February 2016 and enjoyed them very much. In January 2018, I found ribeye cap steaks at Costco that were rolled, tied, and sliced into pinwheel steaks—a better presentation and easier to cook, I think.

What Is Ribeye Cap Steak?

The ribeye cap roll, or spinalis dorsi, may be the most flavorful muscle in the cow. It’s usually cut into smaller pieces and merchandised as steaks. Here’s how the whole ribeye cap roll looks: 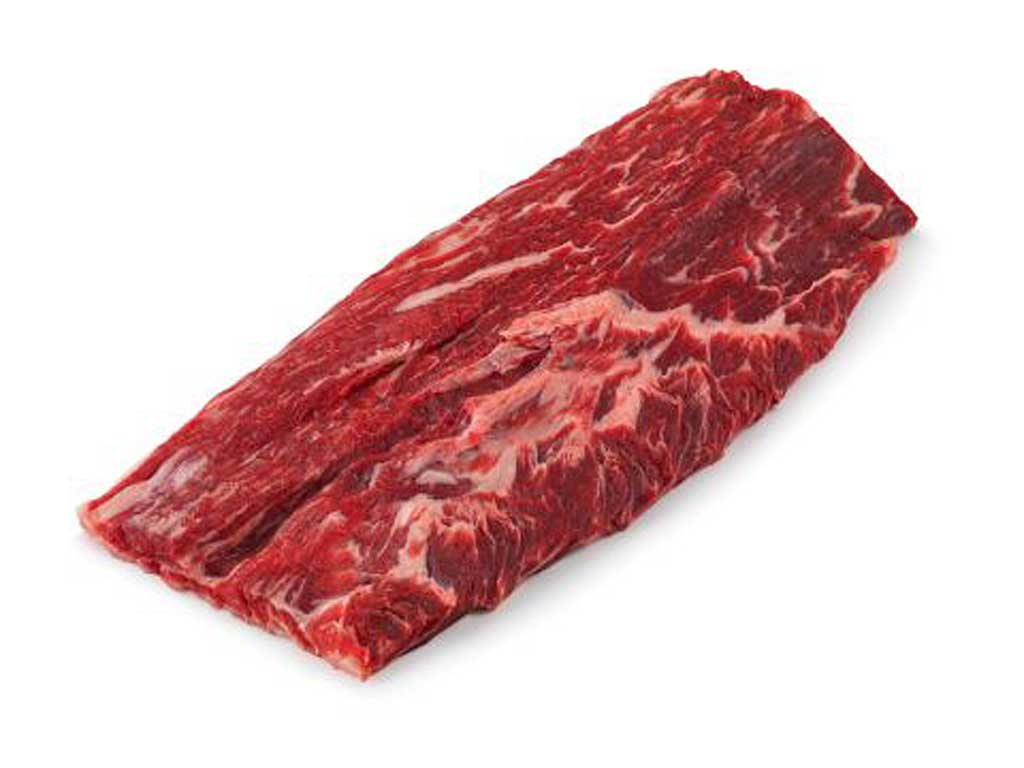 You may have enjoyed ribeye cap when eating prime rib—it’s the highly marbled, tender outside edge that surrounds the large center eye of the prime rib, as shown here: 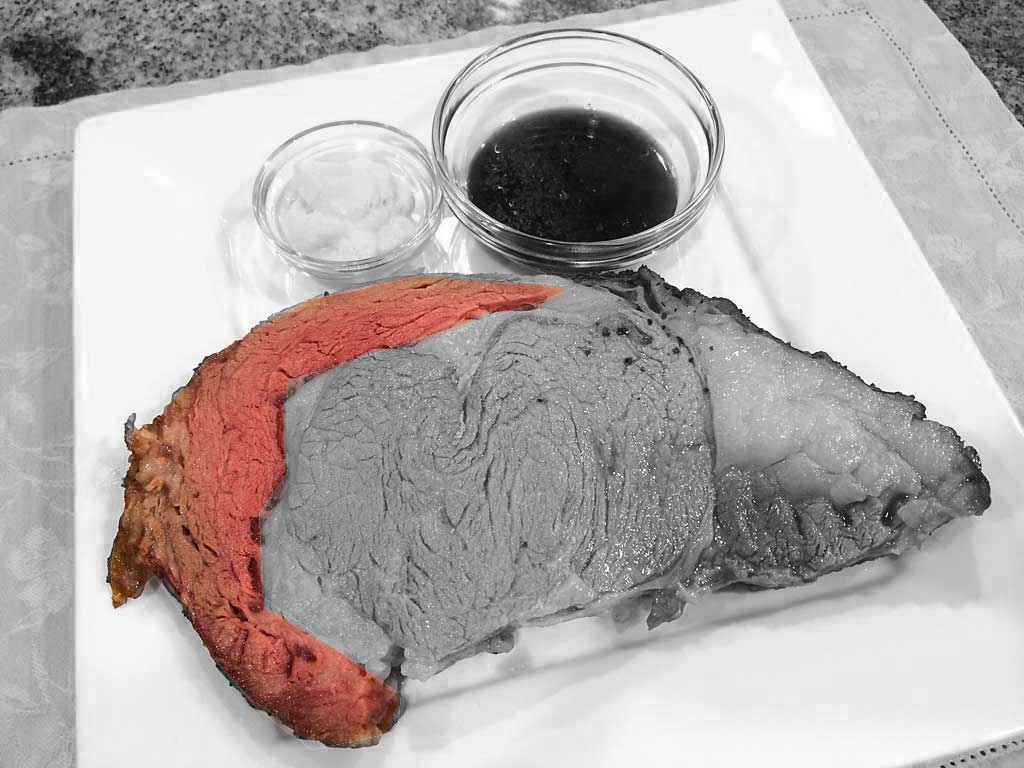 In this particular case, Costco is breaking down the whole prime rib into two parts—the center eye and the ribeye cap—and selling each cut separately in order maximize profits while offering variety to customers.

With a cut of meat as good a ribeye cap, it doesn’t take much to cook it right. Salt, pepper, a hot grill, and cooking to the right internal temperature will do the trick.

Always interested in learning new things, I decided to try a reverse sear method popularized by Cook’s Illustrated magazine in which steaks are slow roasted in the oven at low temperature, and then seared in a skillet on the stovetop for a few minutes…but instead of the stovetop, I’d do it on a cast iron griddle in my Weber Summit gas grill. The advantage: Lots of smoke in the backyard, none in the kitchen! 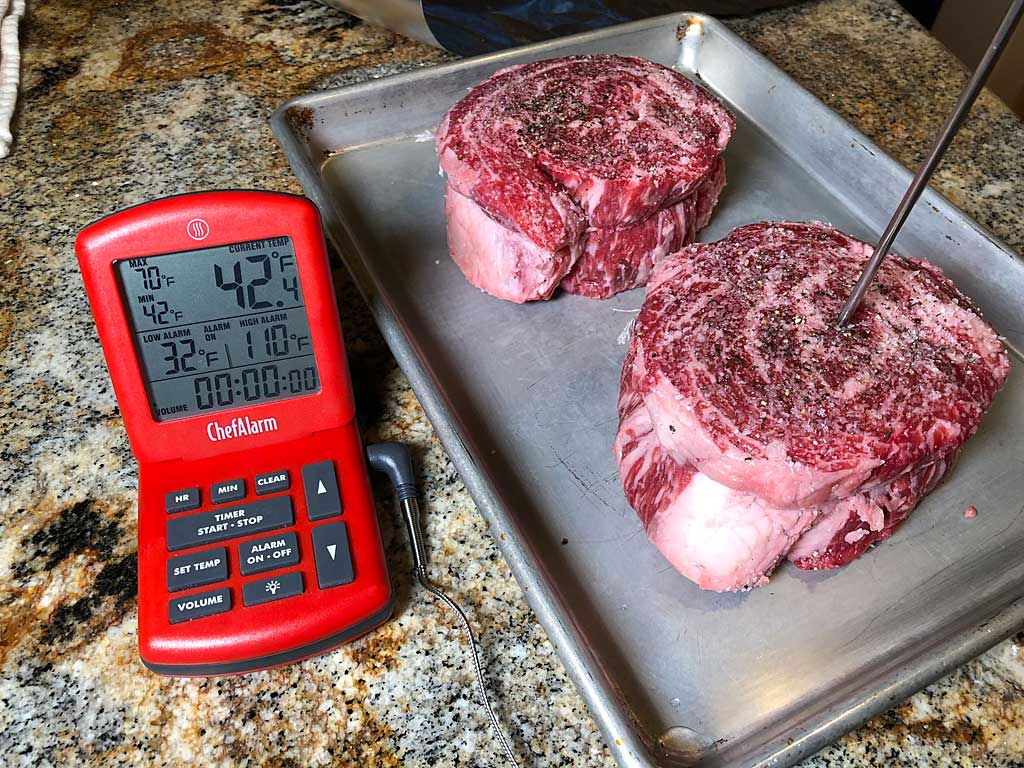 I started with two ribeye cap steaks weighing a total of 1.53 lbs. The butcher at Costco rolled, tied, and cut the meat into pinwheel steaks. All I had to do was pat the steaks dry with paper towels and apply a generous amount of kosher salt and coarsely ground black pepper to both sides.

With the steaks arranged on a rimmed baking sheet pan, I inserted a ThermoWorks ChefAlarm probe thermometer into the center of one steak and placed them into a preheated 250°F oven. 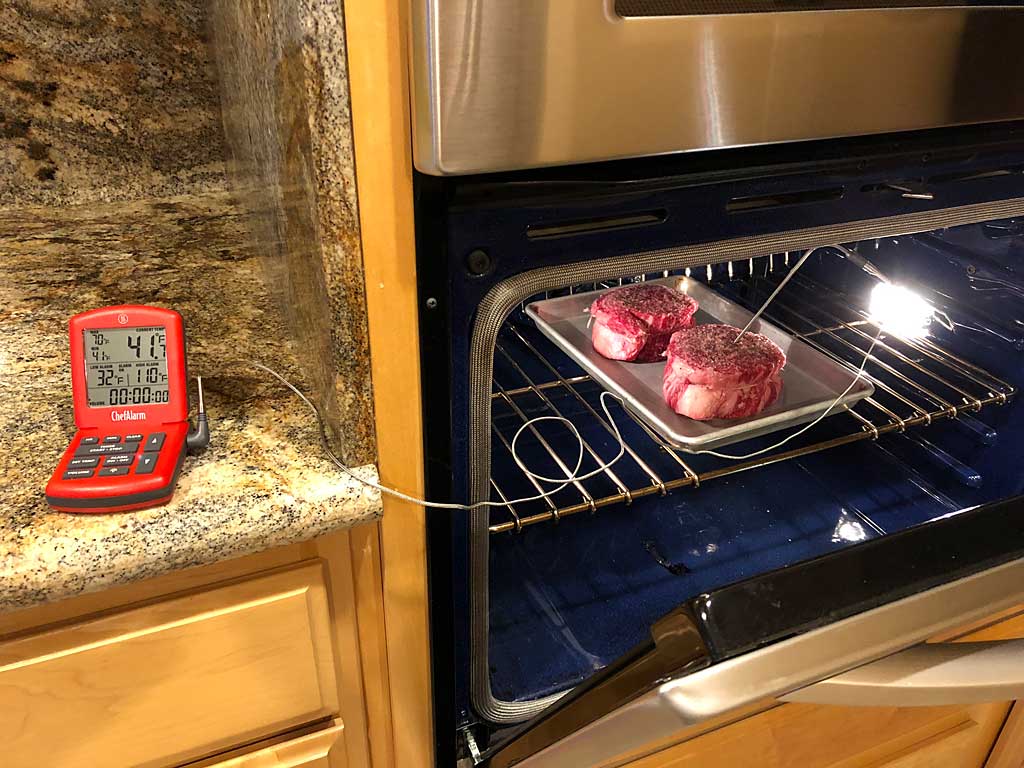 When the steaks reached an internal temperature of 110°F, I transferred them to a ripping hot Lodge cast iron griddle on my gas grill. A Weber 6479 cast iron grill press ensured good contact between the steaks and the griddle. 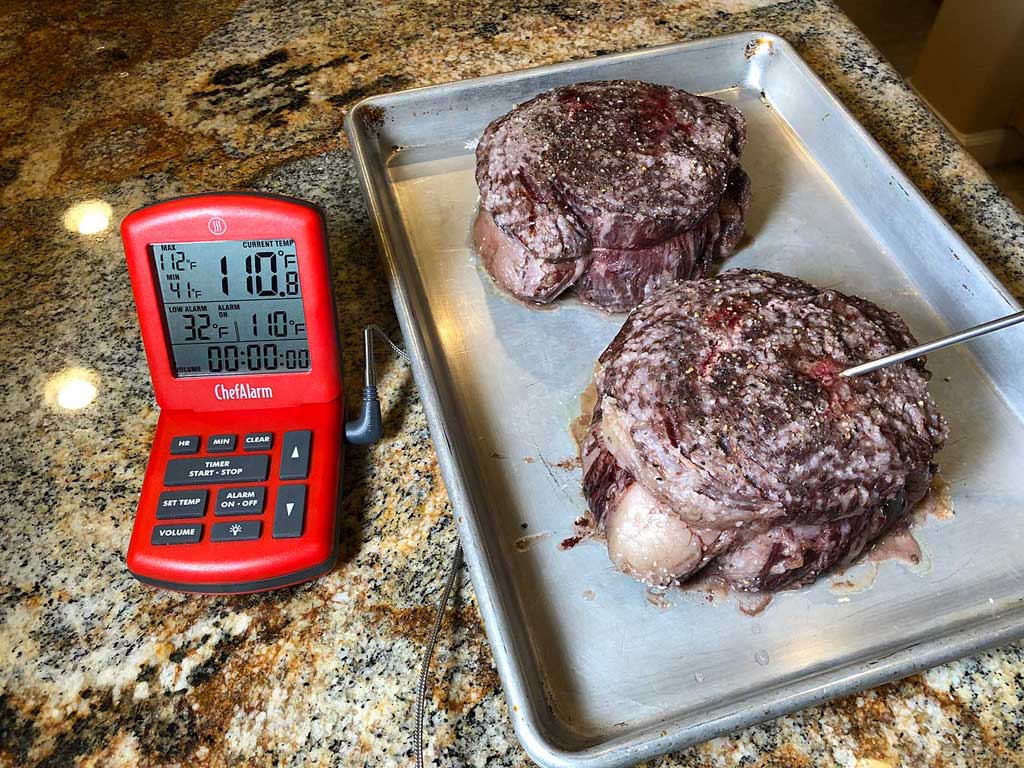 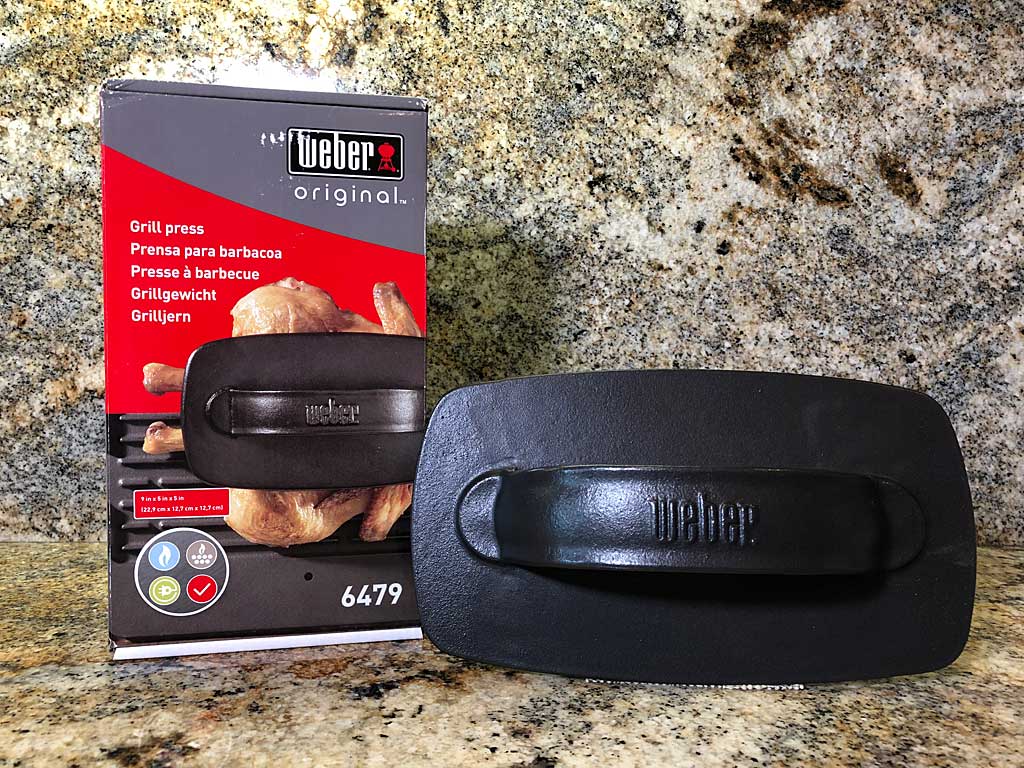 I griddled the steaks over crazy high heat for 90 seconds on each side to achieve a great sear.

When the steaks finished searing, I added a knob of Irish butter on top for some extra richness!

These steaks don’t need much of a rest after searing. By the time you get them on the dinner plate and sit down at the table, they’re ready to go! 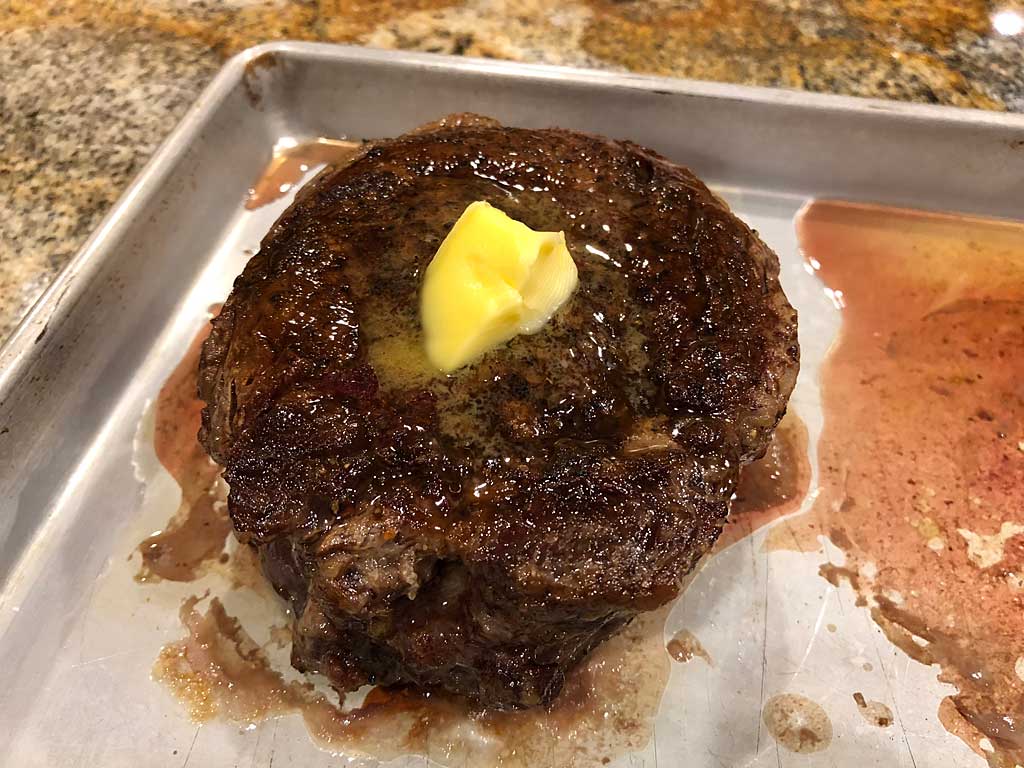 There’s only one word to describe the taste and texture of these steaks: Unbelievable. Soft, tender, intense beef flavor. Dark sear on the outside, bright pink meat on the inside. Lots of juices. Just the right amount of salt. 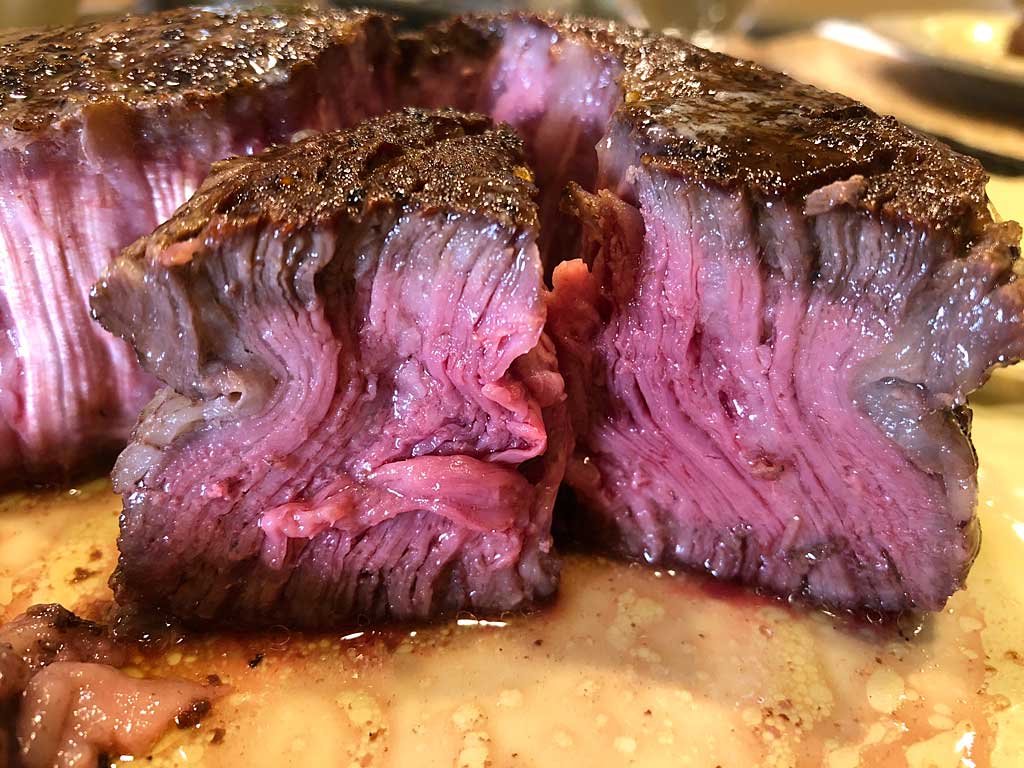 It doesn’t get any better than ribeye cap steaks…I hope you’ll give them a try!