This is the fourth round in our summer hot dog taste-off. If this is your first visit to the taste-off, make sure to read the first installment for details on how we’re selecting and judging the hot dogs.

Last time, Oscar Mayer Selects whipped Open Nature in the Almost Organic Division taste-off. This week, we take on the most sincere hot dog category of all.

These hot dogs are labeled “uncured”, meaning that they’ve been cured using the sodium nitrate that occurs naturally in sea salt and celery juice or celery powder. They contain certified organic, grass-fed beef from cattle that have never been administered antibiotics or hormones and have been humanely raised.

(Note that in these photos, the hot dogs are always shown in the order listed above.)

The hot dogs were grilled together and served to the judges.

Once the hot dogs were grilled but not overly cooked, they were brought indoors and immediately judged on appearance, then sampled and judged on taste and tenderness/texture.

Here are the weighted scores:

It’s interesting to note that in terms of appearance, taste and tenderness/texture, the Applegate The Great Organic Uncured hot dog did as well or better than many of the big brand and premium dogs we’ve tested in other divisions…but at a cost of $5-6 more per package.

So Applegate The Great Organic Uncured is the winner of the Organic Division! Stay tuned for our last division contest of 2014: The Stray Dog Division.

If you’re in the market for a new spatula (and who isn’t), this one’s for you. It’s the Weber 6620 Stainless Steel Spatula. Top-rated by Cook’s Country magazine (June/July 2014), they write:

“Testers loved this spatula’s slim, rounded, offset handle, remarking on the agility, sense of control, and confidence that it inspired. Particularly when the grill is really packed, this is your spatula.”

Agility. Sense of control. Confidence. Sounds more like a BMW than a spatula!

The runner-up was the OXO Good Grips BBQ Turner. It took second place in the ratings because it does not feature the offset design of the Weber, making it less maneuverable on the grill.

The Weber 6620 Stainless Steel Spatula is available at Amazon.com. 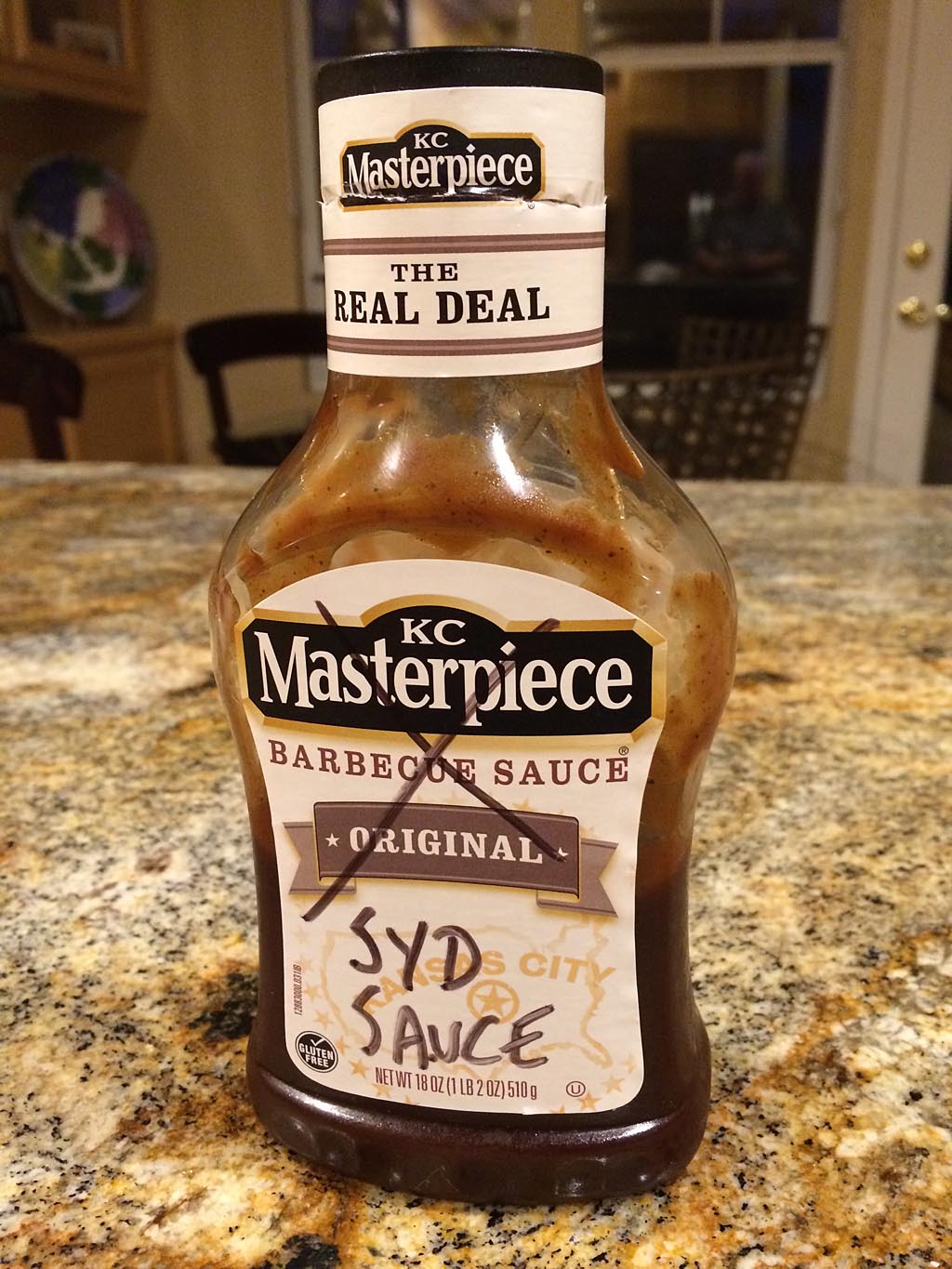 Here’s a tri-tip I grilled on the Weber Summit 450 using Harry Soo’s tri-tip method from his Backyard Pitmaster class. 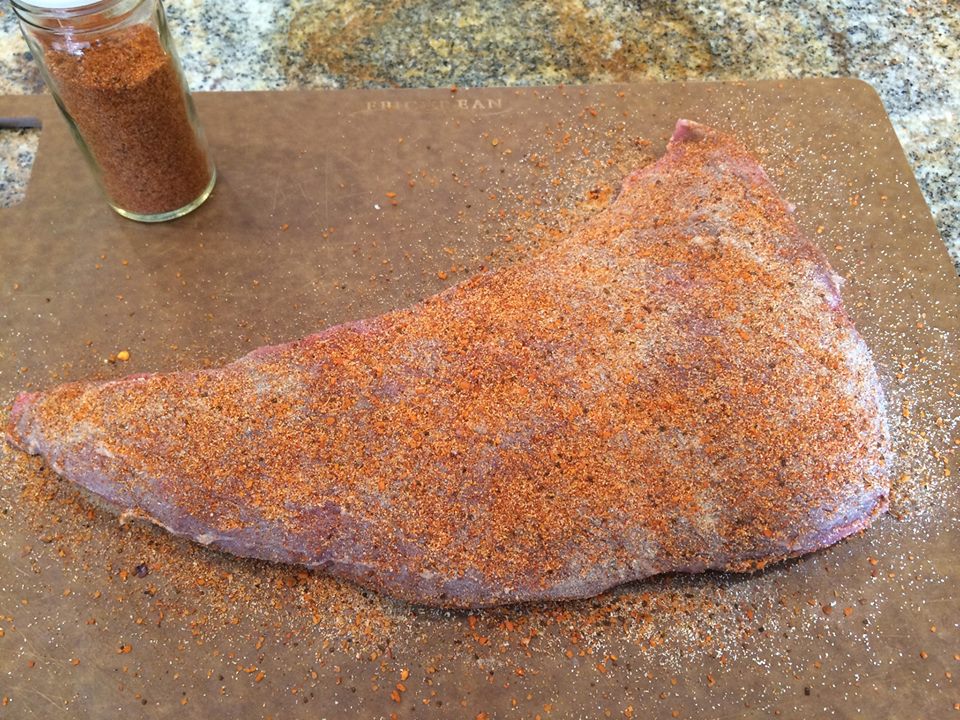 Season the tri-tip with granulated garlic, white pepper, and then some Slap Yo’ Daddy All-Purpose Rub. Refrigerate for 8 hours.

Grill to 125-135*F internal temperature. Remove from grill, tent with foil, and let rest for 5 minutes. 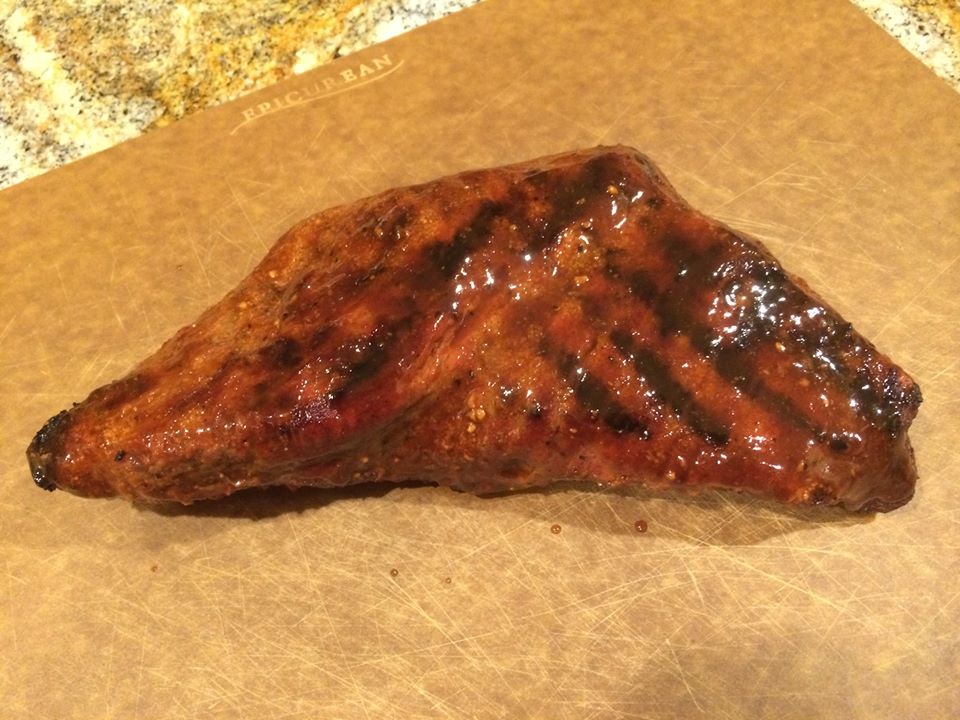 You get layers of spice from the white pepper and the SYD rub, and from the cayenne & hot sauce in the SYD sauce. Really delicious! 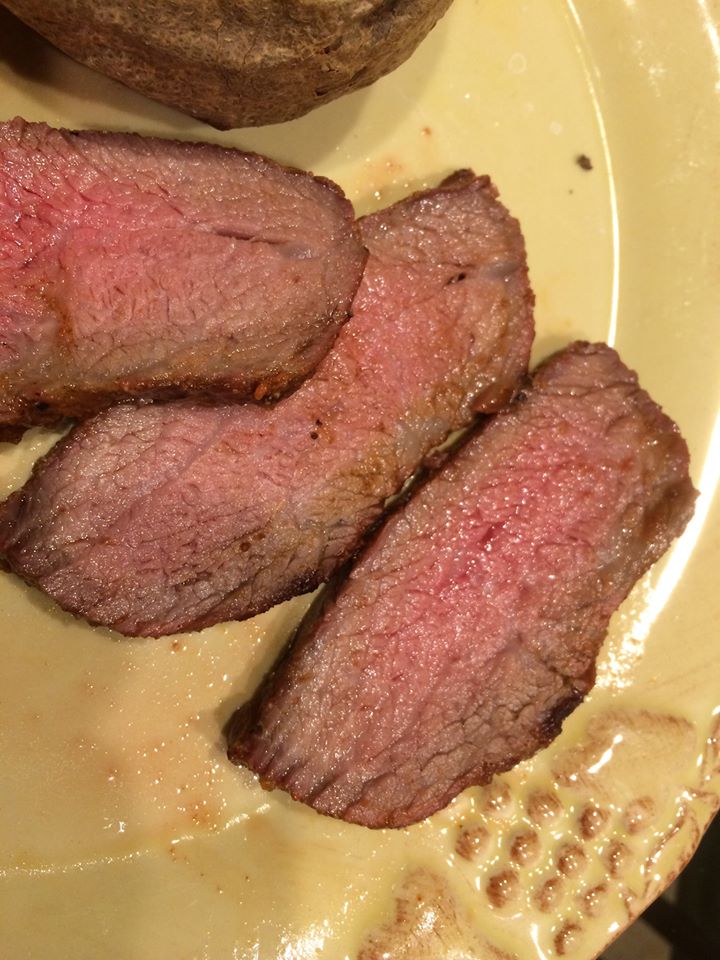 A common complaint from new Weber grill owners goes something like this:

It looks like the paint is peeling inside the lid of my new grill. WTF? I expected more from Weber!

OK, just chillax, Grasshopper. Weber does not paint its grills. They use a baked-on porcelain enamel finish that cannot peel. What you’re seeing is grease and smoke that builds-up during normal use, turns into harmless carbon, and eventually peels off in flakes or sheets.

Before grilling, use a grill brush or a balled-up piece of aluminum foil to remove any loose flakes. If you really want to be fastidious about it, each time you finish cooking, while the lid is still warm, wipe the inside surface with paper towels or a soap and water solution to prevent the build-up.

When I visit Hawaii, one of my favorite indulgences is a dish called loco moco. It’s a gut-bomb that usually consists of two thin hamburger patties topped with over-easy eggs and brown gravy on a bed of white rice, with a scoop of mac salad on the side. Variations include different meat options, having the eggs cooked differently, or sometimes finding onions mixed into the hamburger or into the gravy. What doesn’t change is the basic concept of meat topped with eggs and brown gravy over rice..and the nap you’ll need afterwards.

A sometimes like to make loco moco at home. I made this one a while back using Guava Smoked pork patties. You can only get Guava Smoked products in Honolulu…these were sent to me by a friend…but you could mix-up something similar using ground pork from the supermarket. They’re ground pork butt that’s seasoned, formed into patties, and cold-smoked. They’re sold frozen and you grill them at home.

Start by making a batch of sticky white rice, if you have it, otherwise long grain white rice will do. Make two cups of brown gravy using those little dry packet mixes from the supermarket. Nothing fancy here, I guarantee you they’re using the same packaged mixes in Hawaii.

I built these loco mocos in the wrong order so you could see the grilled meat on top. OK, that’s a lie. I just wasn’t paying attention when I did it. The right way is to lay down a bed of white rice, then place the meat on the rice, put the eggs on top of the meat, and smother the whole thing with gravy.

Make sure to reserve a spot on the sofa after dinner, ‘cuz you’re gonna need it.

Do you sometimes yell at your television?

I yell at my TV every time I watch a cooking show where someone uses the terms “pork loin” and “pork tenderloin” interchangeably. They are not the same cut of meat!

I guess I shouldn’t be too surprised, because both cuts come from the whole pork loin, but they are two distinctly different pieces of meat. And the confusion between the two cuts runs deep with tradition. Throughout the Midwest, they make something called a pork tenderloin sandwich which is really a slice of pork loin that’s pounded thin, breaded, fried until golden brown and delicious, and served on a bun. It looks amazing, but it’s pork loin, folks, not tenderloin!

Pork loin is located next to the pig’s spine, with the meat sitting right on top of the baby back ribs. If a pig asked you to scratch his back, you’d be scratching pork loin. Pork loin is sold bone-in or boneless, usually with a fat cap. You can cook it whole as a roast, or you can cut it into chops.

Pork tenderloin is a thin cylindrical muscle that’s attached to the inside of the ribcage. You couldn’t scratch a pig’s back and touch tenderloin. Pork tenderloin is sold boneless and is very lean, with no fat cap. In fact, pork tenderloin is just as lean as skinless chicken breast…very heart healthy! You can cook it whole or slice it into medallions for pan searing.

What pork loin and pork tenderloin both have in common is a mild taste. Both need something to amp-up the flavor. Think dry rubs, marinades, brining, salting, or serving with flavorful sauces over the meat or on the side.

So now you know the difference between pork loin and pork tenderloin.  We now return you to our regularly scheduled program already in progress. And feel free to yell at your television as much as you like.

Note: This blog post was written in 2014. As it turns out, that was the last year for the warranty specs described in this post. Starting in 2015, Weber changed to a 10-year limited warranty on Spirit, Genesis, and Summit gas grills.

In May, I wrote about an example of fire box burn-through in a Weber Genesis E-310 propane grill. In that post, I noted that the grill was only 7 years old. An astute reader reminded me that full-sized Weber gas grills come with a 25-year warranty on the fire box and that a free replacement fire box would be a better solution than the repair shown in my post.

Yeah…why didn’t I think of that?

When was the last time you thought about your Weber gas grill warranty? If you’ve been suffering with a problem and haven’t gotten around to fixing it, maybe it’s covered under warranty!

Here’s a list of warranty info I’ve lifted from Weber.com. I’m providing it here for informational purposes, make sure to check your owner’s manual for the specifics for your grill or call Weber at 800-446-1071 for more details.

In July 2012, the Centers for Disease Control published an article about injuries resulting from the ingestion of wire bristles from grill brushes. The story was reported widely in the press at the time and caused quite a bit of concern about the safety of grill brushes, and rightly so, since wires can become lodged in the throat or intestines and cause severe pain.

It’s important to check the condition of your grill brush often. If bristles are coming off the brush head, or you’re finding stray bristles inside the grill, it’s time for a new brush. It’s common to not notice anything until you clean-out the inside of your grill and find the bottom filled with little pieces of wire.

Also, after preheating the grill and brushing the grates, spend a few seconds examining the grates. If you find stray bristles on the surface, carefully remove them before placing food on the grill…and then toss that old brush in the trash!

Just to be safe, Weber recommends that you replace your grill brush each spring to avoid any problems. The Weber 6493 21″ 3-Sided Grill Brush is one of the best and is highly recommended by members of The Virtual Weber Bulletin Board.

A popular technique for cleaning exterior porcelain enamel on Weber grills, both gas and charcoal, is to use super-fine 0000 steel wool and a degreasing spray like Simple Green or Formula 409. You can use this technique to occasionally deep-clean your grill or to restore an old grill to like-new condition. 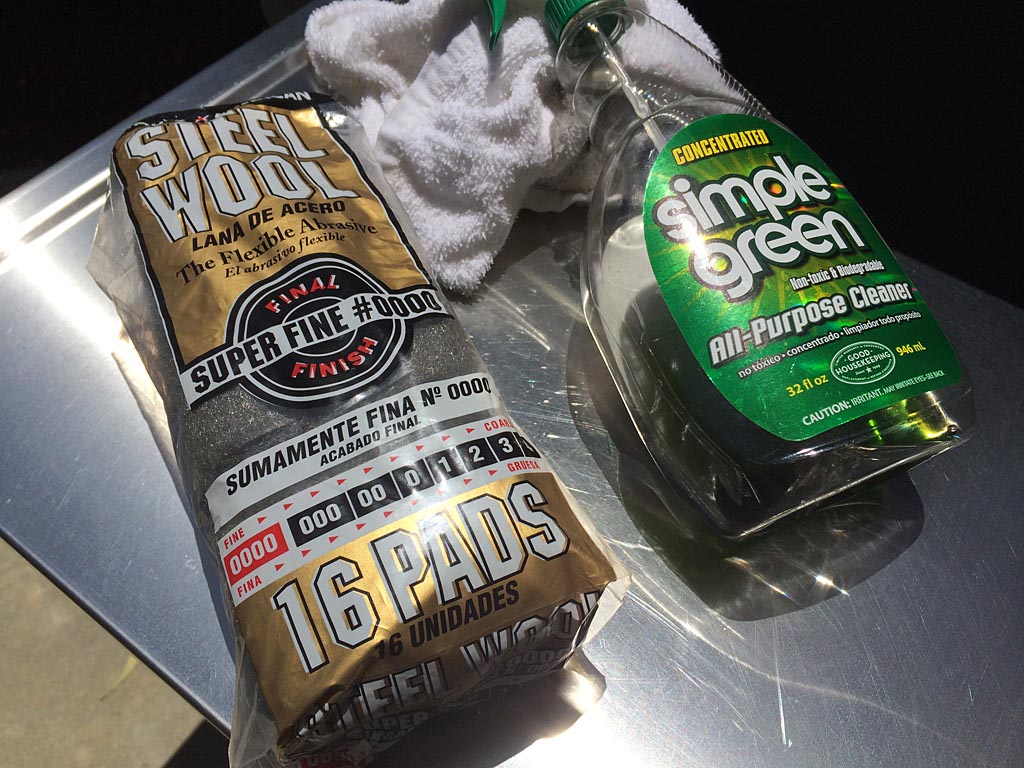 Here are the steps: 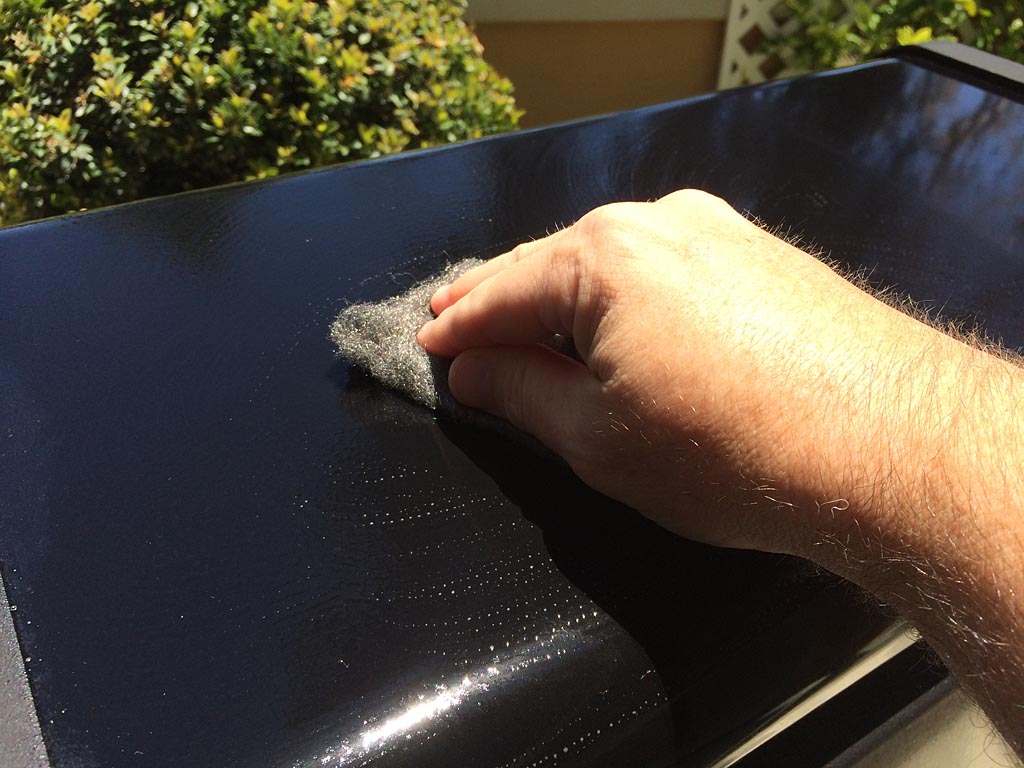 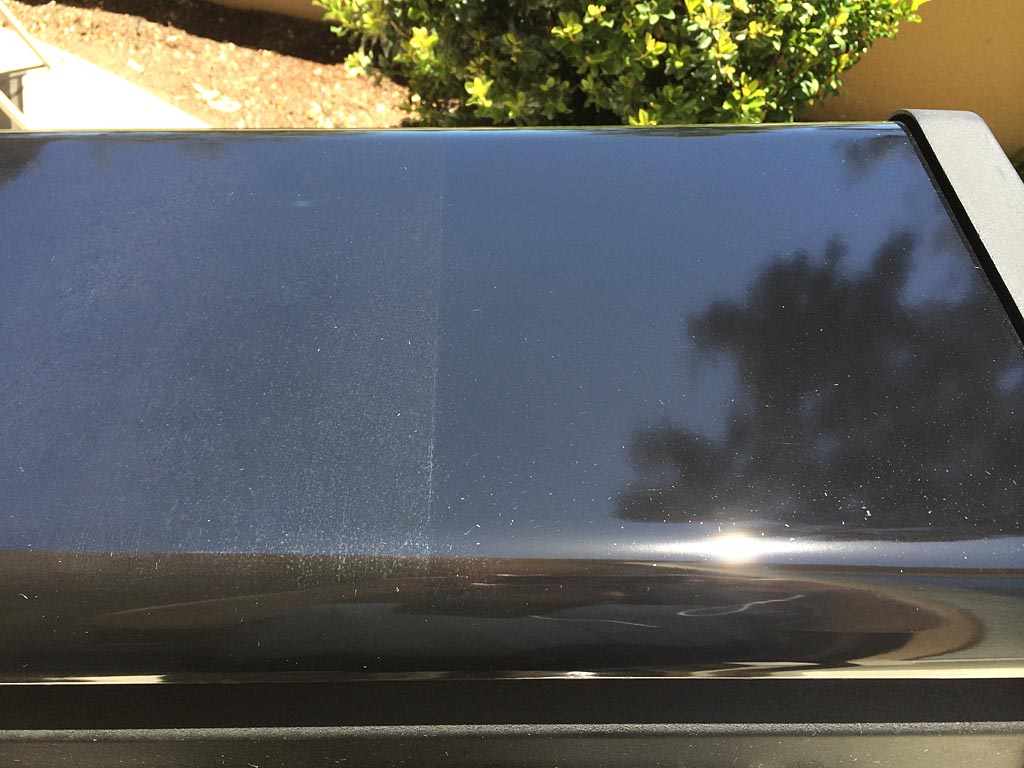 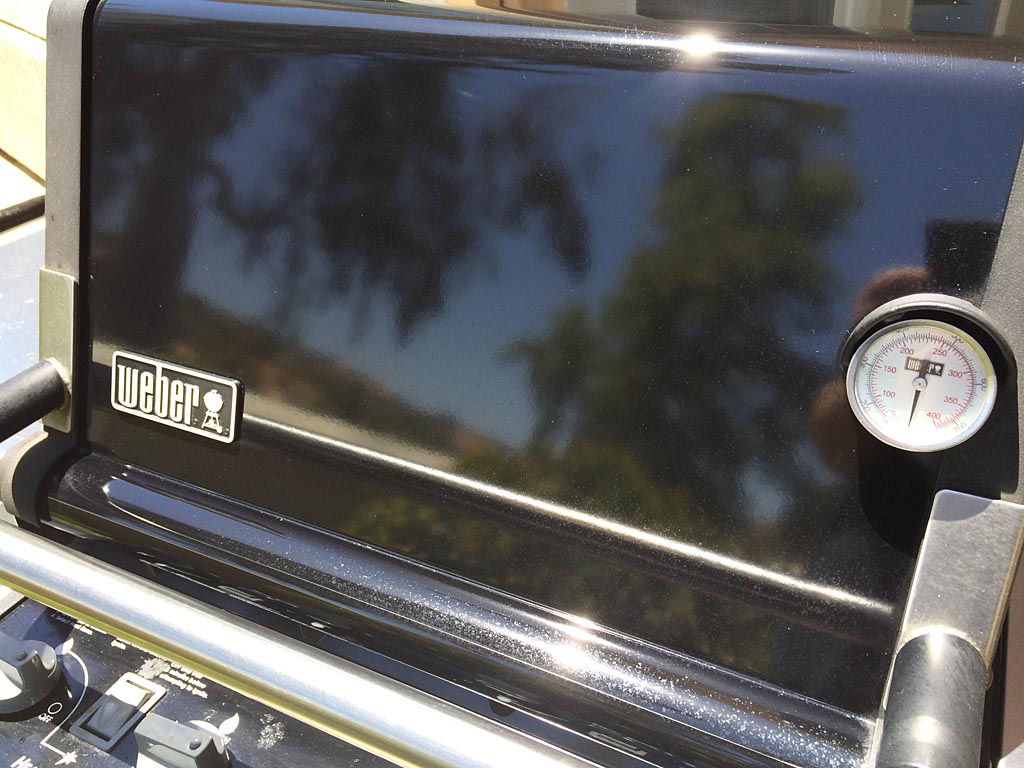 Thanks to countless members who have shared this technique on The Virtual Weber Bulletin Board.