Sunday is Father’s Day, and I want to extend my greetings to all the dads out there!

I hope you get to spend time with your dad on his special day. Maybe take over the grill and treat him to his favorite meal. If you can’t see your dad in person, give your dad a phone call and tell him how much you love him. If you’re into the high-tech stuff, use Facetime. Just make sure to tell him.

And if your dad is no longer with us, think a happy thought about him and honor his memory on Sunday.

Here’s my dad with his Weber gas grill. This grill was my first gas grill, and I gave it to him when I bought my Weber Summit. Sometimes I wish I still had that redhead. But I know it’s in good hands.

Over the next few weeks, we’ll be putting a bunch of hot dogs to the test and tell you which one is the best! Inspired by Slap Yo’ Daddy’s application of KCBS judging to fast food burgers, we’ve decided to do the same for that beloved summertime favorite, the hot dog.

We’ll organize the dogs into divisions and grill them together for the same amount of time on the same gas grill. Each dog will be judged using the 2014 KCBS scoring system for appearance, taste, and tenderness/texture. Hot dogs will be sampled plain, without buns or condiments. Judging will be conducted by me and my wife, Julie.

To simplify and standardize the taste-off, we’re limiting the competition to all-beef hot dogs of standard length (not bun length) weighing about 2 ounces each. All hot dogs are purchased at supermarkets in San Jose, CA.

This division consists of basic beef franks from the heavy hitters of corporate hot dogdom:

(Note that in these photos, the hot dogs are always shown in the order listed above.)

The hot dogs were grilled together and served to the judges. There were some obvious differences in the way each brand grilled up. It should also be said that the front edge of the grill may run a bit hotter than the back.

Once the hot dogs were grilled but not overly cooked, they were brought indoors and immediately judged on appearance, then sampled and judged on taste and tenderness/texture.

Oscar Mayer plowed-under Farmer John by a margin of 2.3 points and sent Ball Park to the showers with a commanding  8.6 point victory.

Here are the weighted scores:

So Oscar Mayer is the winner of the Big Brand Basic Division! Stay tuned for our next division contest: The Big Brand Premium Division. 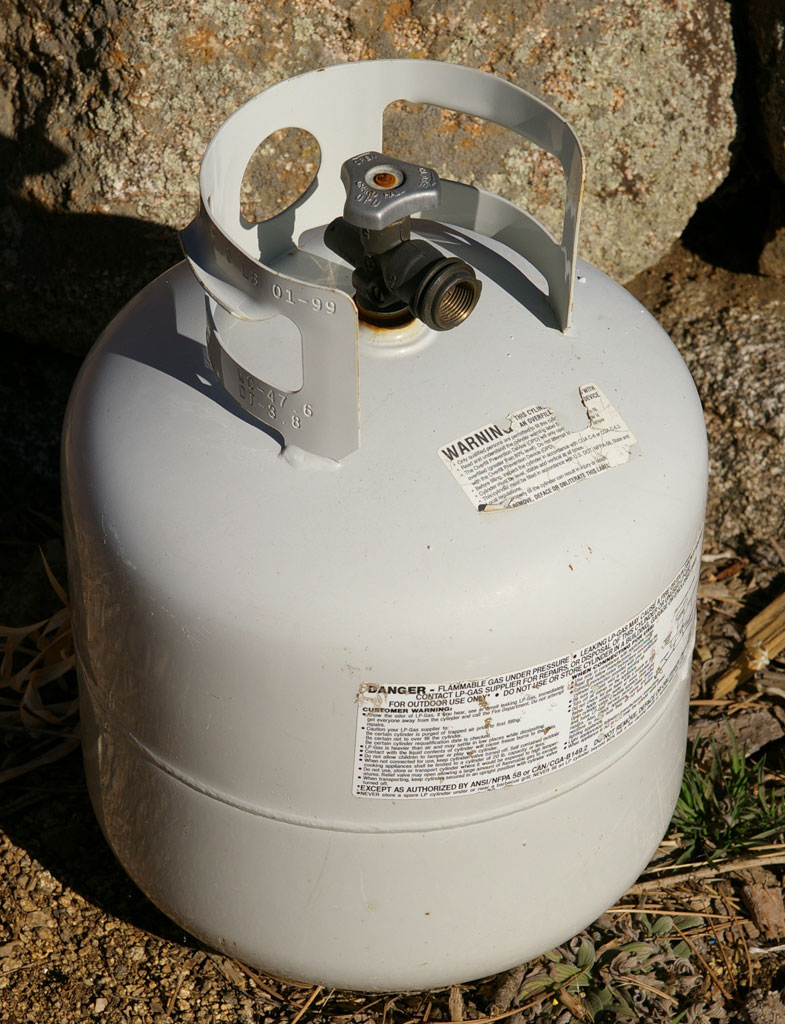 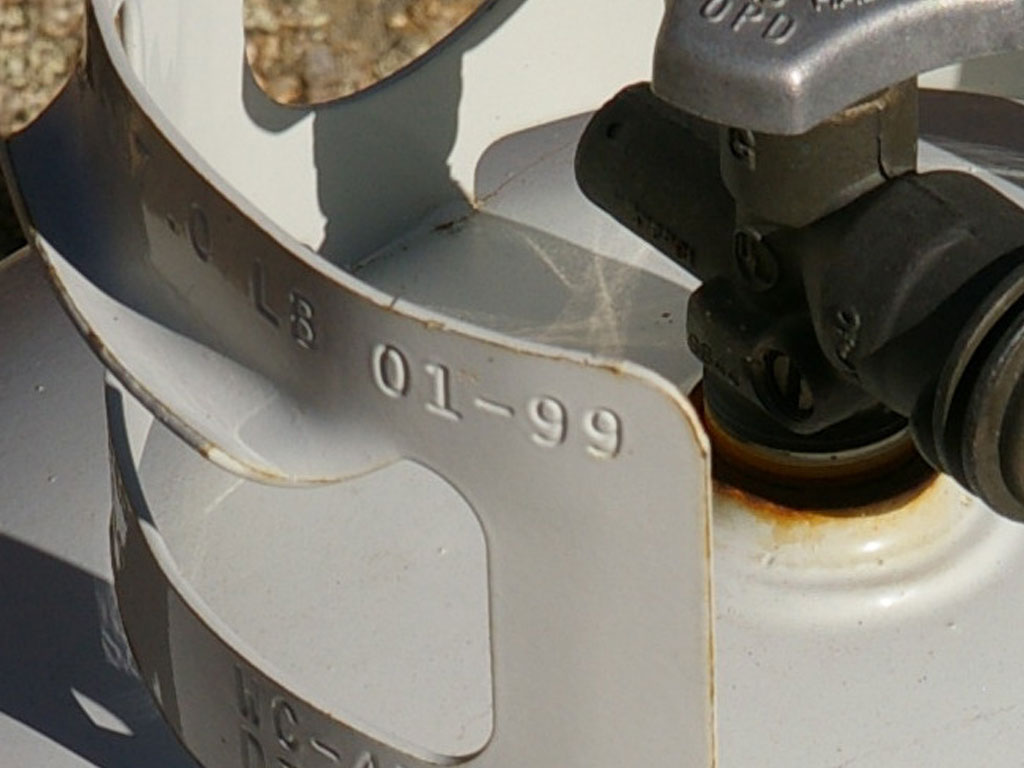 This video is as close as most of us will ever get to a personal tour of the Weber factory in Palatine, Illinois.

Sit back, relax and enjoy the next 7 minutes watching how Weber gas grills are made.

Are you a hardcore Weber gas grill fan?

I ask because in my experience, only the hardest of hardcore fans knows that Weber makes built-in gas grills for outdoor kitchens and grilling islands.

Two models are offered in the Summit line: the S-460 4-burner and S-660 6-burner. Both grills come with infrared rotisserie, Sear Station burner, and a smoke box with dedicated burner as standard equipment. Both come in propane and natural gas versions.

And did you know there’s an optional built-in dual side burner?

So if you’re about to embark on an outdoor kitchen project this summer, consider including a Weber built-in gas grill in your plans. Your investment in Weber quality will pay dividends for years to come! 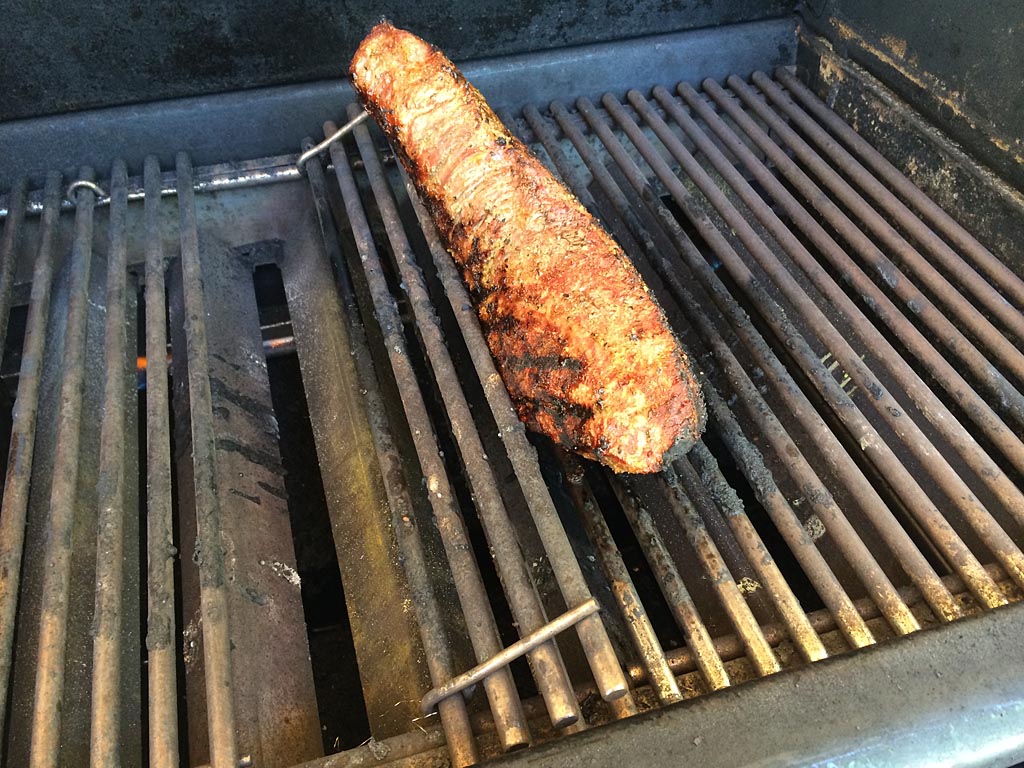 If you’ve grilled your fair share of tri-tip roasts, you’ve probably encountered a few that were very thick, especially on one side. The one shown in this photo is an example of that. I had seared both sides nicely, but that big, thick edge was just begging for a good sear, too.

I was aware of techniques like using wadded-up aluminum foil to prop-up meat on edge, but while grilling this roast I noticed a solution sitting right in front of me: the swing-up part of the grate on my Summit 450 that allows access to the smoker box.

Just pop open that grate, lean the tri-tip against it with the thick side facing down, and sear away to  your heart’s content.

If you have a grill with a swing-up grate, I hope you can take advantage of this simple but effective tip. 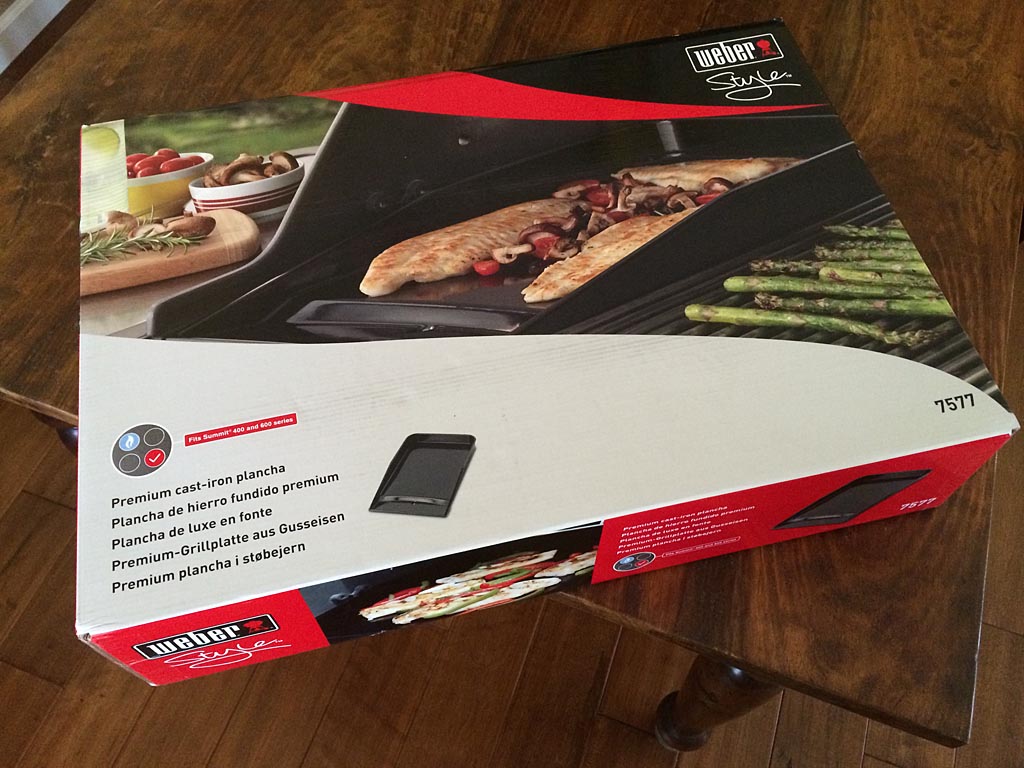 One of my resolutions for 2014 was to do more cast iron grilling. Another resolution was to buy more grilling toys. So I recently got the Weber Style 7577 Premium Cast Iron Plancha for my Summit 450 grill. 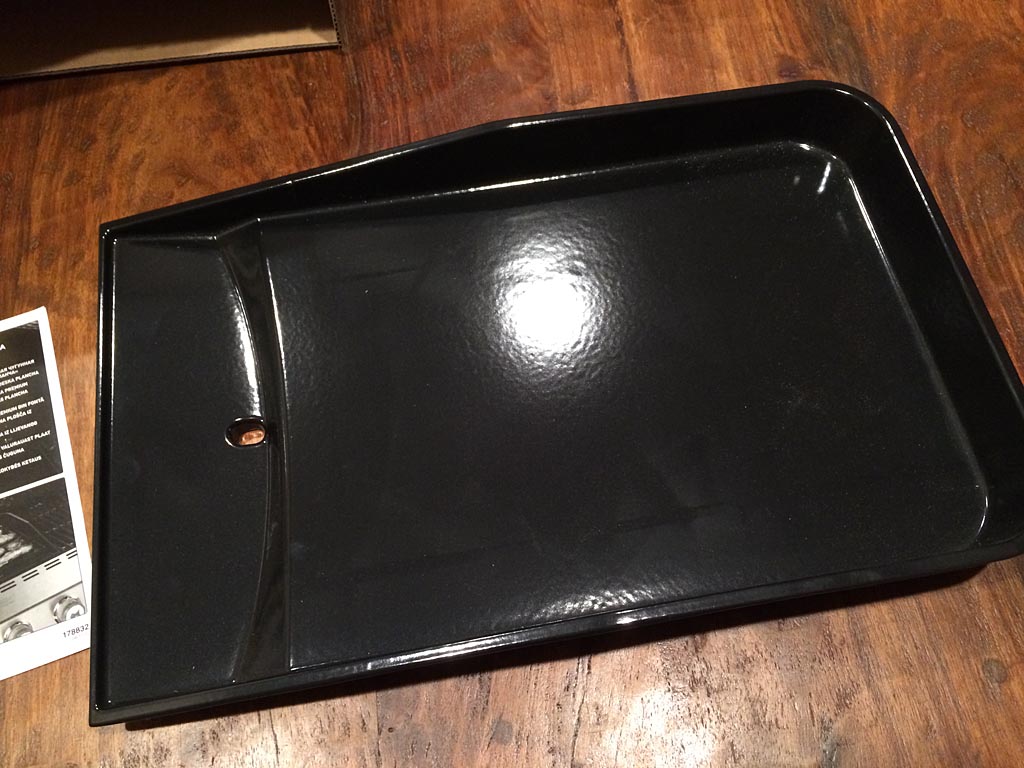 Plancha is a Spanish term for a metal plate or griddle or flat-top grill used for cooking. Here’s how the Weber plancha looks out of the box. Heavy cast iron construction with a glossy porcelain enamel coating for easy cleanup and no seasoning like raw CI. The plancha replaces one of the grates in your gas grill. The cooking surface is slightly angled forward so that liquid runs toward the drain at the front of the plancha and exits into your grill’s grease tray.

You can cook anything on a plancha that you would normally cook using CI. Think meat, fish, fruits and veggies, even breakfast foods. I’m thinking about several things I want to try and I’ll post the results here.

These planchas are not one-size-fits-all. You have to buy the right one for your specific grill. You’ll find a big selection of Weber planchas at Amazon.com.

Why not just use a cast iron skillet or a griddle on the grill? You could, but the benefits of larger size, high sides, no seasoning, and liquid drainage makes these planchas hard to beat!

You do turn off the gas supply when you’re finished grilling, don’t you? If not,  you should. Weber says so.

Why? It takes the pressure off the hose, valves, and connections inside your grill. If any of those parts were to fail, you’d have a potentially dangerous gas leak on your hands.

“But I don’t turn off the gas supply to my kitchen stove after each use, and that’s inside my house,” you say. Your kitchen stove and other indoor gas appliances are designed to operate under continuous gas pressure. Your grill is not.

Remember, the manufacture is recommending that you turn off the gas supply after each use. Maybe you should follow their advice. Why take any chance at all when it’s so easy to reach down and turn a knob?

Is there a proper sequence for turning off the gas? Weber says to turn each burner control knob to the OFF position first, then turn the gas supply off at the source. The next time you cook, follow the safe lighting process by reversing those steps.

I like a clean machine. I get that from my dad. He used to wash the car in the driveway every Saturday morning. He was constantly running the vacuum around the house and going through bottles of Windex, cleaning windows inside and out. Drove my mom nuts. He’s 73 years old now and although he’s slowing down a little, he’s still basically the same way today. So I come by my clean grill obsession honestly. Or perhaps genetically.

I keep four products on hand for cleaning stainless steel. 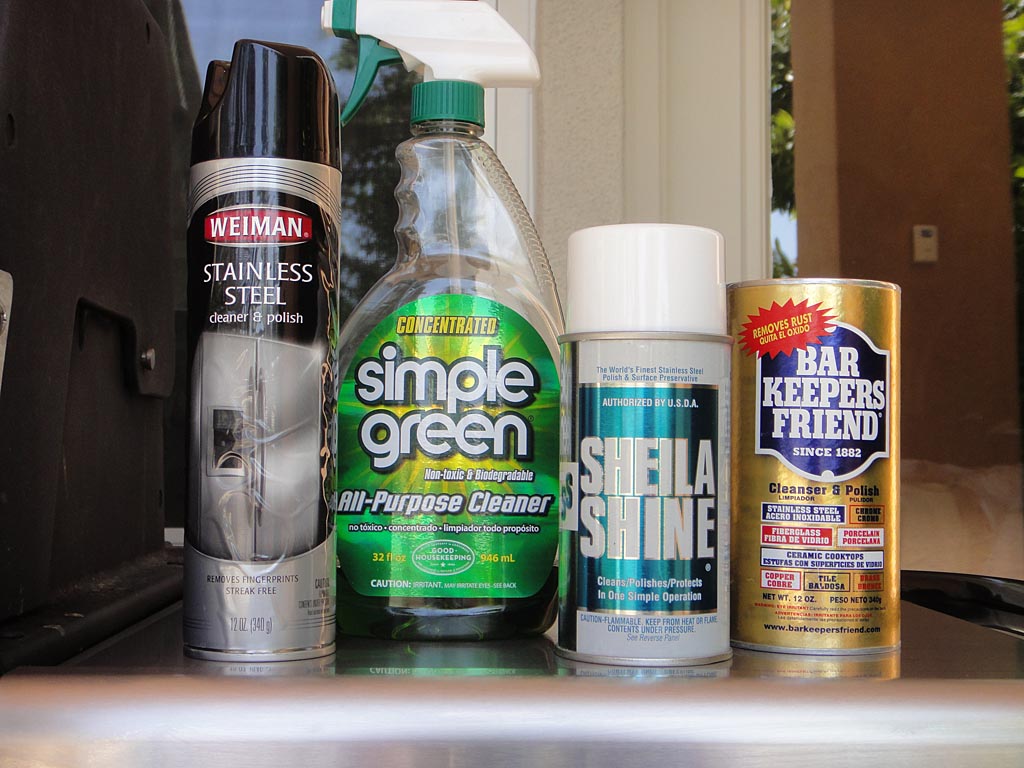 If I’m doing a light cleaning, I go straight to Sheila Shine. It cleans and polishes in a single step.

If I’m doing a deep cleaning, like in the photo below with lots of grease and grime, I start with Simple Green. Spray liberally, let soak for a few seconds, and wipe. Repeat once or twice until the surface is clean. Then I use Weiman to get rid of streaks and leave a matte finish.

I rarely use Bar Keepers Friend, because of the abrasive and acidic nature of the product. But if you need to remove a stain or rust that the other cleaners can’t handle, BKF is the way to go. Test first in an inconspicuous spot to see how it works. Use a small amount of powder on a wet sponge. Use plenty of water to wet the product. Scrub very gently with the direction of the “grain” in the stainless steel. Rinse thoroughly after use. If you’ve got sensitive skin, wear rubber gloves when working with BKF.

By the way, BKF is great at removing those rainbow stains in the bottom of your stainless steel pots and pans!

You’ll find Simple Green, Weiman and Bar Keepers Friend at Walmart and Target. You can get Sheila Shine at many Ace Hardware stores or from Amazon.com.

Do you have a favorite cleaning product or routine? Are you a clean grill neat freak like me? Let us know with a comment!

Weber publishes an annual GrillWatch survey in which they hire a market research firm to uncover the latest trends in grilling. This year they polled people on gender differences about grilling.

The following is an excerpt from the survey. Do you find any of these results surprising?

Confidence Part 2: One-third of male grill owners (34 percent) state that they are a better griller than most people, whereas only 17 percent of women agree with that statement.

Boys Like Their Toys: Like collecting cars, men tend to acquire multiple grills more so than women. Thirty-five percent of men are more apt to have two or more grills than women (25 percent).

Gather ‘Round the Grill: Men (33 percent) more so than women (26 percent) agree that it is “extremely important” to have the grill when entertaining family and friends

Thanks Dad!: When it comes to learning how to grill, 59 percent of U.S. grillers teach themselves, but one-third also learn from their fathers (34 percent) and 15 percent from a spouse. Inside cooking is typically taught by mothers (56 percent) or self-taught (45 percent).